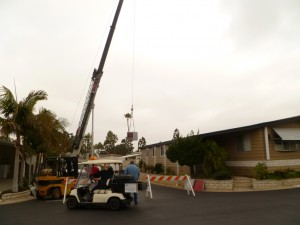 The homes in Lakeshore Gardens Mobile Home park have more stability in the electrical supply system as the park is only one transformer away from having all new electrical transformers.

Jack Chambers of Chambers Electric, Inc is the prime contractor for the replacements. The park notified the effected homeowners that the electricity would be off from 7:30 am to 7:30 pm. Jack and his crew had the power restored before noon! 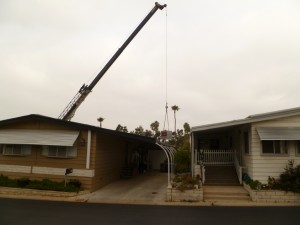 The crane was from Bob’s Crane Service in Lakeside. The crane that they brought to the park was capable of lifting 75 tons – or 150,000 pounds. The transformer weighed less than a ton so it was a easy job but not simple. The operator had to lift the crane between 4 houses and carry it over the roofs of two houses. We are sure glad it was held up by strong straps as one of the houses was ours! 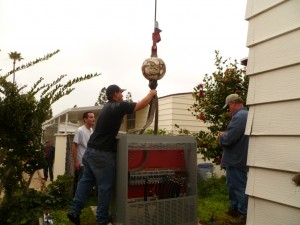 The New Transformer in Place

Finally the new transformer is resting where the old one was taken from. We appreciate the park for replacing the transformers before they blow and for the great work by Chambers Electric and Bob’s Crane Service.

Click on the pictures to see a larger picture.

We have been actively involved in Real Estate in California since purchasing 55 acres in 1975. We subdivided the land, built a house on one parcel and sold the others. We have subdivided other properties, owned two Real Estate companies, lead monthly seminars in Real Estate Investing, and sold hundreds of homes and mobile homes over the years.
View all posts by Stephen Davis →
This entry was posted in Lakeshore Gardens and tagged Carlsbad CA, Lakeshore Gardens. Bookmark the permalink.