Erica Davis is a challenged athlete who was paralyzed at Thoracic-8 December 31, 2005. Since then she has become an Inspirational Speaker and has participated in over 20 different sports. January 31, 2010 Erica became the first female paraplegic to reach the summit of Africa’s highest mountain – Mt Kilimanjaro.  To view Erica’s personal website click here. 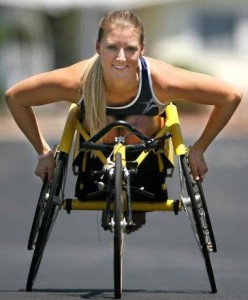 Erica participates in many Triathlons, 5k and 10k races and marathons. She recently raced in the Oceanside Turkey Trot 5k on Thanksgiving Day 2010. 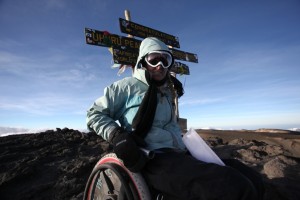 Erica Davis at the top of Mt Kilimanjaro Africa

Erica became the first female paraplegic to reach the summit of Mt. Kilimanjaro in Africa. Standing at 19,340 above sea level Mt Kilimanjaro is the highest free standing (not part of a mountain range) mountain in the world. A documentary of the trip was made and you can preview the trailer by clicking here.